Greece: “There is a war in social media, without guns but with keyboards” – Interview with fashion blogger Alexia Sakellariou

Yesterday, Greece voted “No” in their referendum and decided against following the creditors’ reform requirements. Even before this decision, the Greek media landscape has had to deal with the current financial crisis. We spoke with Alexia Sakellariou, one of Greece’s top bloggers and author of the fashion blog Smells Like Fashion, about how she perceives and handles the situation.

Since 2010, Alexia has dedicated her bilingual Greek and English blog Smells Like Fashion to worldwide fashion news, offering detailed reports from Greek fashion shows and events, interviews, seasonal trend reports and outfit posts. She has a degree in Advertising & Public Relations from Panteion University and is currently studying in London, following the news on her home country from abroad. Alexia told us about the consequences of the current situation for the Greek fashion blogosphere, being perceived as “luxury,” the discussion on social and traditional media and how the young generation perceives this crisis.

The last 10 months I’ve been living in London, because I am pursuing my MA studies in Fashion Journalism. I currently don’t work, because I need to focus on my degree – as a result, I am depending on my parents for financial assistance. Things were difficult even from before, but the last week is insane. Everything is so uncertain, we do not even know if our country will stay in the Euro Zone, or whether we will return to our old currency. And, in both cases, what does this mean? Naturally, we are facing the unknown and, as all human beings, we are afraid of the unknown. 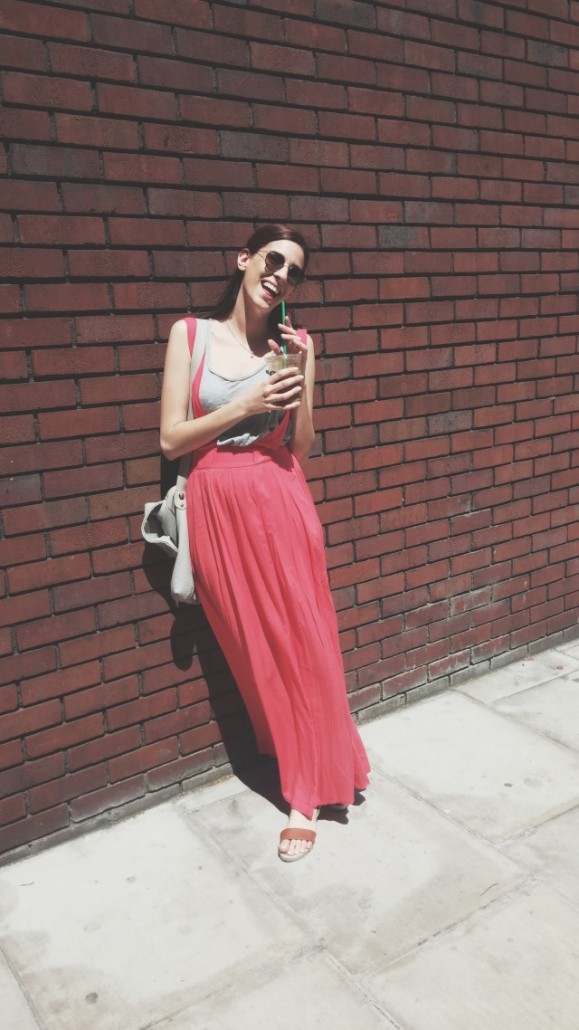 Since the beginning of Smells Like Fashion, I tried to be humble. Of course, I was never one of those girls who could afford expensive stuff, but I also didn’t want to promote such a lifestyle. But the last week, things turned pretty bad. I can’t (and also I don’t want to) promote expensive products, even if I am getting paid from similar brands. Also, I can’t promote a “luxurious” lifestyle, like posting picture of my new dresses or shoes. Funny thing is that things we took for granted before, are now considered luxurious. The readers get easily upset and sometimes they make harsh comments (so far I haven’t experienced something similar, but other bloggers have). To put it simply, you cannot talk about fashion to people who can’t afford to buy anything, people who are limited to withdraw 60 euros per day from the ATM and therefore are struggling to pay bills or medicines, people who are stocking their kitchen shelves with food. At the same time, though, I can’t give up on my blog – it’s my “ticket” to a better life, it’s my work, my passion, my identity. In addition, even during the darkest times, fashion was still present. Think about the World War II and how Christian Dior came up with the New Look shape after the War finished. So you can’t just give up on fashion. Finally, my blog is supposed to be entertaining. If I give up on it, or start talking about Politics, who will be entertained? Who will forget their problems? Nobody. So I am trying to handle the situation smartly and see how things go.

As I said before, people have become very harsh in their reactions. I personally haven’t experienced a nasty comment yet, but this may be because I am doing my best to be humble and find smart ways to distribute my content. In terms of engagement, I’ve actually noticed that there are more “likes” (on the posts) than usual. I try to upload nice pictures from London to make the Greek readers escape for a few seconds, but at the same time I do not post pictures of fancy clothes or expensive restaurants. I am very careful with that.

I try to focus more on international media to be informed about what’s going on in my country – they are far more objective. The Greek media (TV, newspapers and online) are corrupted in most of the cases. The mainstream ones are opposed to the government and its choices and they are promoting relevant opinions, while the less mainstream ones (mainly online or public TV stations) are close to the government no matter what. Personally, I believe that every coin has two sides and, if you want to get a clear idea of what’s going on, you have to keep up with both types of media, as well as international ones. I am ashamed of saying so, but I was never aware of what was going on in Greece. During the last week though, I’ve read so many things and I have finally formed my own opinion, without being biased or without anyone trying to persuade me.

I avoid Greek media as much as I can. I mainly get informed by the online versions of CNN, BBC, The Guardian and Al Jazeera.

I am really glad to answer to this particular question, because this is the main problem of Greece during the last week. The country is torn apart, Greece is divided into two groups: the YES people (the ones who voted Yes to Sunday’s referendum, aka the ones who want to stay in EU) and the NO people. Facebook is a mess and I am actually considering of closing my account for a while because I simply cannot stand my timeline anymore. Both sides are being harsh, both of them are fanatics and they keep on attacking each other. If you publicly expressed your opinion, people judge you depending on one statement. I am not overreacting when I’m saying that friendships and families have been destroyed over the situation and what opinion each one has. Having an active social media account is the worst thing right now. Honestly, it’s like a war. But instead of guns, we have keyboards.

Unfortunately, I am not an expert on that and I really cannot foresee the future. However, I believe that it’s going to be a very weird situation, mainly because we are used to using social media as a “showing-off” technique. I wonder how this will continue if the worst case scenario becomes reality. At the same time, though, the Greeks and especially young Greeks, are known to have endless humor and creativity so I am sure that many websites or even star-ups will slowly pop up, in order to either entertain or produce something that will be actually helpful. Things will change, all it needs is creativity. Who knows, we may even change the rules of fashion blogging – DIY is the answer.

What is your response to the results of yesterday’s referendum?

It was expected that “No” would win. Personally, I hope with all my heart that the government will finally fight for us by staying in the euro zone and trying to make the best possible deal with the creditors. I don’t know much about politics and I do not want to express any opinion on that, but I do know that my generation deserves a better future. I hope other countries will fight for us, too.

All I want to say is that my generation lives the ultimate nightmare. We may not have lived Wars, or actual poverty like our grandfathers had, but the current Greek crisis is certainly a nightmare. My generation, people who are in their 20’s and 30’s that is, have spent most of our lives studying hard to achieve what? Having no jobs? Or suffering forever? In a snap of a finger, all of our dreams and hopes for the future we gone. Independent of the result of Sunday’s referendum, we are all devastated.

Even though money makes the world go round, I believe that sooner or later Greece will be able to stand on its feet again. But what about the Greeks? I already left my country in order to study and, even though I wanted to return at some point, I have rejected this option since last Friday. Most of the people I know are struggling to find a job abroad, even before the latest crisis. And what about all the fighting over who believes what? Will we ever respect each other’s choices? Will we ever be united?

I really don’t know what the future holds (if we suppose that there is an actual future to talk about). All I want is a leader who says the truth and fights for my future. I want a leader who apologizes when he/she screws up, a leader who inspires me. I don’t want a leader who thinks about his/her pocket, nor one who will constantly blame the previous governments without doing anything to change the current situation. And, honestly, he/she is nowhere to be found.

Thanks to Alexia Sakellariou for her perspective and this compelling conversation. We wish her all the best for her blog, her studies and the future.