Following our conversations with All You Need Is Style, Beauty Co.Co, Smells Like Fashion, and Miss BlouBlou, we spoke to Greek fashion blogger Rania Kelesidou. Ms. Kelesidou started her blog Nothing Like Fashion in 2011, sharing her daily outfits, beauty, shopping, fitness, inspirational content, and advice. She is currently in the last year of her studies as a Mechanical Engineer at the University of Thessaly. In her interview, she talks about how the situation in her home country has affected the fashion blogosphere, and how social media has become a platform for political discussion. 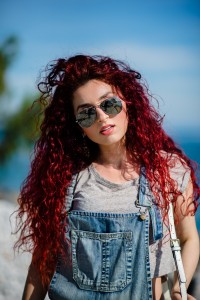 I think it’s basically impossible for anyone living in Greece not to be affected by it. First of all, it has dramatically changed our everyday life, from the economic aspect to our spiritual mood. Then, of course, there is the fear of unemployment. I have been studying for almost all my life to be able to become a Mechanical Engineer, and my parents have worked really hard so I can study, but with the current situation in Greece and with increasing unemployment, young people in Greece usually can’t find work and inevitably many go abroad. On the other hand, when it comes to my hobby of fashion blogging (I consider it a hobby since I don’t make a living out of it), I can’t deny that with the situation being as it is, there are times that I honestly wonder if what I do is in fact quite pointless. I mean, Greek people deal with real life problems every day. There are families that can’t afford even the basics, so of course I often wonder if fashion and lifestyle have any part at all in a situation like this.

Of course there are things that I’ve changed, and not even deliberately or consciously for that matter. What I mean is that since my everyday life has changed, and since my blog is some sort of a diary of my everyday life, that one has changed as well. I was never the one to be able to afford very expensive stuff or have a very luxurious life. Since the beginning I have always loved affordable brands and shopping at sales, and purchased only a few designer items every now and then when they had a good discount, and my readers were of course aware of that. But after we entered the crisis, I obviously shop much less and show ‘new stuff’ very rarely now.

Even though Greek people deal with very hard situations on a daily basis, I believe that they still try to find some sort of entertainment through internet and blogs. Maybe even more sobecause of these problems, we try to find some moments of relaxation where we can forget our problems and see things just a little more optimistically. We’re full of news about the economic crisis and the political problems, so it’s nice to have the option to read something different and a bit ‘lighter’ every now and then. Luckily I personally haven’t had any bad experiences with criticizing comments so far. I think most people realize that fashion blogs aren’t about showing off or promoting consumerism, they’re about simple girls or guys sharing their passion.

This is a topic where there’s truly no sense of objectivity whatsoever. On the one hand, there are international publications that either blame the Greek people and present us as lazy and idle, and others that imply that Greece is constantly trying to take money and never pay it back. On the other hand, there are local media that spread fear and panic, especially the ones that are against the current government. We have really seen and heard everything lately. Luckily there are still some voices of logic, both on the international and local level. However, with the difficult situations we experience these days, (like the banks being closed for weeks) it’s understandable that it’s not always easy for people to discern them.

I read almost exclusively digital media. When it comes to fashion, I read many blogs and fashion related sites, though every now and then I buy some magazines because I really like the feeling of them. But when it comes to news, I get information only from the internet, both from Greek and international media.

In the last few months, social media has become probably the most common place for political discussion. People share articles, express their opinions through them, and often comment on each other’s posts. In my opinion, this is very interesting and a very healthy expression of freedom of speech. Of course, this is true only until it gets to the point where people become combative and aggressive through social media and start insulting each other (which unfortunately does happen sometimes and it’s really sad to witness).

It probably has started changing already. People have started losing trust in traditional media and are getting tired of the sources they used to rely on for all these years (like TV or 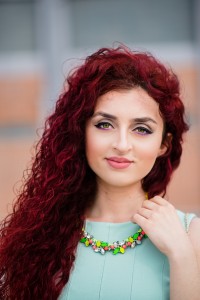 newspapers), mainly because they have now realized that there’s too much false information and guiding of people’s opinions coming from them. More and more people turn to digital media, and even social media, where there has been huge criticism of traditional media lately.

What was your response to the referendum’s result?

Honestly, the ‘No’ was quite expected. Instead of seeing even a slight improvement after all the things we’ve been through, things have gotten worse and worse. That’s why people have started coming to the conclusion that the policies developed during the past years simply didn’t work. We all needed a change, but we also still wanted to stay in the eurozone – not only because of the economic aspect, but also because we do feel a part of it. The European feeling is very strong among the Greek people. I’m not the one to talk about politics, since I have so little knowledge on the subject, but I sincerely hope our politicians will find a way to do the best for our country.

The only thing I’d like to add is that I have big hopes that just for once the right decisions will be made for Greece. Unfortunately, the Greek people have been deceived many times in the past, and many have given us false promises. People living in other countries might not be totally aware of these things, and it’s quite understandable, since they constantly hear about Greece needing more money. But the thing is that this ‘money’ never actually reached the Greek people. I sincerely hope that this will not be the case one more time.

Thanks to Rania Kelesidou for her perspective and this interesting conversation. We wish her all the best for her blog, her studies and the future.